He stands up straight

Her eyelids not quite dry

I look at her

She looks at him

He waves at me

We spin in a ring of love

And recognise the day

Child of my child, I

scoop you up and hug you, breathe

you in and keep you.

become your hands in cloudy

He stands up straight

Her eyelids not quite dry

I look at her

She looks at him

He waves at me

We spin in a ring of love

And recognise the day 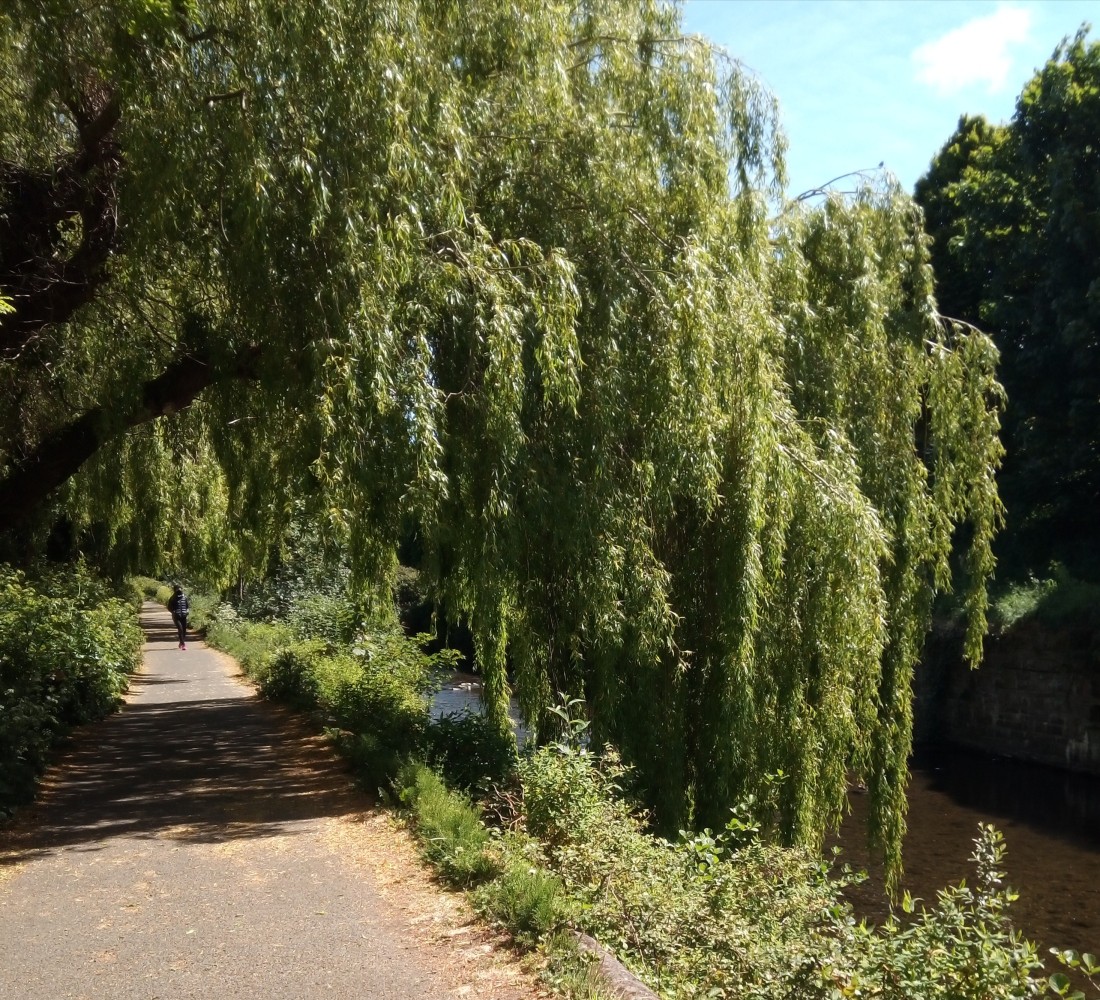 Being, like Woody Allen, too hostile to drive, I left my son to the airport bus. He was twenty, the first child to cross the sea in any direction, and he was going to America for a year to work in a holiday camp for children. To the Catskill mountains he was going, near New York. I stood on the road until I couldn’t see the bus any more and then I went into town as though it was any old Saturday. At three o’clock, when I knew he’d be taking off, I sat down; I had discovered a new pain in a new place.

Later, I went into his room and looked at the empty bed. I changed the sheets and tidied and cleaned. And then I washed all his clothes and hung them out and took them in and aired and ironed them, and folded them, oh so neat.

Long days later he phoned. He wanted tea-bags, nothing else, just tea-bags, and would I send them? He was having a great time, he said, meeting people from all over the world and he loved the heat and the craic was great but he wanted tea-bags. He said the night he arrived he stood at a balcony window and looked out at New York and he couldn’t stop smiling to himself because he was really there. And the picture of his there, leaning out with hands on the railings and him smiling is still in my head like a lost photograph.

So I got the tea-bags and packed them up and sent them and waited to hear they had arrived. His siblings said it was great; they never had to answer the phone when he was away because I’d have broken bones trying to get there first.

The parcel arrived. He’d be happy now, I thought, and I pictured him in the camp, up in the Catskill mountains with a crowd of children all different colours like in a holy picture, and them all sitting round in a circle drinking tea.

One day in town I looked at a mannequin in a window, and whatever way the head of it was turned or the way I looked at it I got such a sharp, terrible pain. My feet didn’t know where they were and I put a hand to the wall to steady myself.

The months passed and the day came for his return. oh, such cleanings and washings – I had everybody working, and at last, at last, the car arrived and out he got – a stranger, older, tanned, dressed in shorts and sandals – in a place where even on the hottest of hot days the boys sweltered in jeans and runners. He looked like a visitor and for a short while seemed like one.

That was years ago and they have all left and returned many times. You’d think I’d be used to it by now, but I’m not.

There was sleet falling. It fell straight down in the windless, chill air but the boys ignored it. They were standing outside the pub hoping someone would lend them money or bring them out a few beers. Barney Madden ran them out of it but they went back when he took himself home. Like he owned the place, Stevie said, fuck him, all he does is wash the glasses.

Andy felt the unhappiness grow in his chest again. It was heavy and he fought against it. No, he said to himself. No. He held his arms up and out in front of him and made soft, crooning, engine noises.

“Definitely getting a bike, so I am, and it won’t be long now. I’m still getting a couple of days on the boat with Dominic Byrne and he says he’ll have more work in the Summer and I’ll start saving then . . . “

Andy dropped his arms and sat on the wall.

“What do you say, Stevie Wonder?”

Stevie threw the butt of his cigarette on the ground and watched it roll into a puddle.

They walked up and down, their fingers squeezed into the pockets of their jeans and their shoulders hunched and they thought about riding bikes on the straight, endless roads with the sun hot in the sky and their ipods loud in their ears.

“We’re never going to have them bikes,” Stevie said.

He nudged the rolled-up poster tucked under Andy’s arm.

“That’s as near a bike as we’ll ever get . . .  cost a fuckin’ fortune even if you do have a job – most of them don’t hardly pay more than the dole. And you’ve got Lily and wee Grace. Have we any fags left?”

Andy lit a cigarette and dragged on it before passing it to Stevie. Stevie had a part-time job delivering newspapers to shops. Great, he said it was, getting up at three in the morning, the streets all dark and no traffic so you could hear the sea, and then the day to yourself. He wanted Andy to come too when the other helper was off, but Lily wouldn’t let him – said she’d be scared on her own at night, even though them birds were in the downstairs flat. She hated them birds; they were always laughing and talking so loud in the hall. Andy couldn’t imagine their lives – he looked at them like they were on television.

The sleet began to fall thicker and faster. There was no one they knew coming or going and Andy could feel the cold going into his bones.

He pulled the sleeves of his jacket down over his knuckles and curled himself around the poster. One of his runners was letting in and he tried to bend his foot away from the wet spot. He went up the shore road at a half-run and paused as usual to spit into the sea; it was only a habit now; he never waited to see how far it went.

He stood outside the flat for a minute staring up at the window, trying to guess if Lily and the baby were in or not. He opened the front door and listened. There wasn’t a sound, and then he heard a noise in the downstairs flat and the door swung open. Shite, Andy thought.

“Hi,” he said, moving towards the stairs, mopping at the wet hair on his forehead.

The girls stopped at the sight of him. Their faces were bright and their blonde curls bounced on their woolly scarves.

“Hello! Hi! There’s nobody up there.”

“We’ll warm you up. You look like a wee icicle.”

Andy bolted for the stairs.

He sniggered quietly to himself at the thought of what Lily might do if she came home and he was in there with them birds . . . they might have cooked him something and they’d have the heating on, probably had a big telly as well. Andy sighed, a long, painful sigh. He went into the kitchen and edged past the table to the kettle, batting the onions out of his way. They were strung from hooks in the ceiling. Lily had seen that once in a movie and insisted on stringing them up although she didn’t eat onions – didn’t cook anyway.

Water rattled into the kettle and Andy shivered with his hand on the cold tap. Maybe Lily would bring home something from the Chinese – she did that sometimes if her mother gave her some money.

The music filled the room

We pushed the table back

Stacked the chairs and

Formed a ring to watch

With joy of movement

And while she whirled she changed

All her own self, on her own

Detached from my detaining hands

Finished and the stranger sank

Turned to me for confirmation

But never quite the same.

In a whitewashed wall

At night the whisper

The lamps, blood-red and

Black-robed in the corner

Her father sang us songs

Threaded laces in his boots

And shooed us, lit by candles

To the quilted, feather bed.

A rattle of keys at the back door

His face shut tight against us

Toed-in, he crouched over furtive whiskeys

Over chin and cigarette

And we ghosted from the room

But once he showed me Dickens

And he was The Small Dark Man

Alone in a house of women

Cut off by his country voice

From an old melodeon

His face would lift with love

Now I surprise myself

Fingers curled over chin and cigarette

And I have to leave the room.